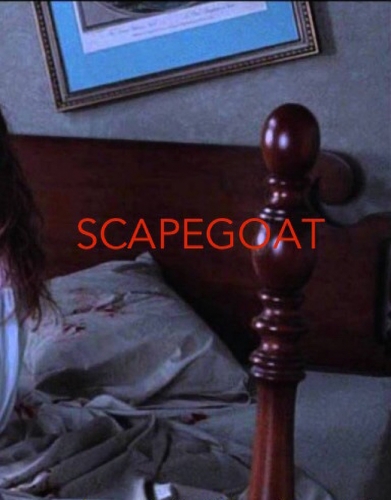 The figure of the scapegoat is a central player in validating the dominant class and neoliberal agendas. It is also a key attribute to being an artist in academia. The university, functioning under a big business model, allows just enough criticism to reaffirm its authority and distract crowds of protesters with an admittance of small evils in order to detract attention from much larger exploits.

The artist-teacher finds oneself in an untenable position. Functioning as a representative of the school and critic of the system, the teaching artist suffers from maintaining a questionable ethical position as witness to the operations of both parties. I, and many more teaching artists, exist in this precarious space, right now, with mounting lawsuits and our silenced protests.

The devil is within us and outside of us. In 1973 The Exorcist was released. In it a teenage girl demands that all forms of control be excised from her body and soul. In that same year Roe v. Wade provided a fundamental "right to privacy" to protect a pregnant woman's liberty to choose whether or not to have an abortion.

Each of these events challenged authoritative control over the bodies of its occupants. Over four decades later Americans struggle to keep belief and the imaginaries of dominant culture off our bodies. Young, poor, women of color will be the first to suffer from the encroaching laws – this is unacceptable.

It is in the spirit of protest and learning that I created this performance (Kill your teachers, but first kill your desire to scapegoat the other).


Cara Benedetto (b. 1979 Wausau, Wisconsin) received her B.F.A. from Wisconsin University, River Falls in 2001 and her M.F.A. from Columbia University in 2009. Her work has been highlighted in shows at Chapter NY; Metro Pictures, New York; MOCA Cleveland; the Museum of Modern Art, Warsaw, Poland; and Night Gallery, Los Angeles. She was a 2014 fellow at Akademie Schloss Solitude, Stuttgart. She was a 2014 recipient of a Rema Hort Mann Foundation Emerging Artist Grant. She is the author of two romance novels, The Coming of Age and Burning Blue. She is the editor of Contemporary Print Handbook, published with Halmos. Benedetto is an Assistant Professor in Print Media at Virginia Commonwealth University.

Based in Los Angeles, NAVEL is a test site for community-driven projects, critical equitable practices, collaborative learning and kinship. Through a range of events, performances, exhibitions, screenings, talks, and working groups, NAVEL creates a space where individuals come together to share the knowledge, skills, and volition necessary to find novel ways to organize, distribute resources, impact and bridge communities.