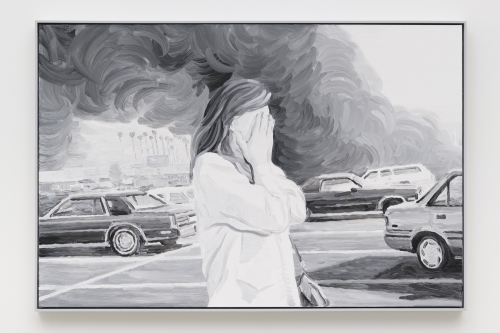 The Dallas Museum of Art has acquired Cynthia Daignault’s painting, "Elegy (Los Angeles)" (2019), for its permanent collection. Anna Katherine Brodbeck, the DMA’s Hoffman Family Senior Curator of Contemporary Art writes, "Cynthia Daignault’s Elegy (Los Angeles) is history painting for our time. Although Daignault’s source material is a photograph of the 1992 LA uprising, it still hits a raw nerve, both in terms of the plumes of smoke which call to mind the wildfires that have ravaged the west coast this summer and the country’s continued reckoning with racial injustice. Her distinctive brush strokes are almost at odds with her grey scale palette, animating the supposedly neutral presentation of the news with a pulse of emotion."

Daignault is a Baltimore-based painter known for an ambitious and wide-ranging practice, exploring the contemporary American experience through a diversity of subjects. Of her Elegy series, the artist says, "Created in monochrome, [these] subjects [...] exist beyond reality, fading into memory, history, and death. Each canvas is an elegy, a metaphor for the contrast between eternal forces: black and white, life and death, love and loss. These works look back to Picasso’s Guernica, and through Picasso to Robert Motherwell’s Elegies and Andy Warhol’s Death and Disasters. As in those precursors, the subject is abject horror—the sickness of bearing witness to an unthinkable global tragedy and the dilemma of how art might make sense of collective trauma."