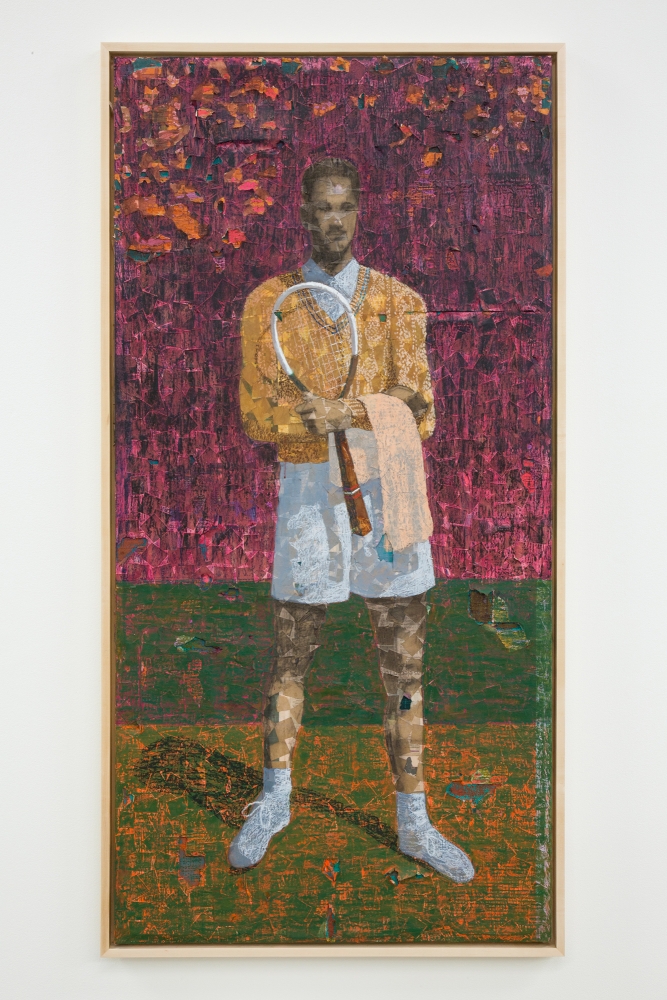 Fordjour is known for works that involve the imagery of games, ranging from competitive sports to lotteries, comparing their explicit, rules-based systems to the massive, mystified systems of the world that surrounds us. “Worst to Be First” specifically refers to the notion of “firsts” as markers of societal achievement. Isolating in a monumental portrait a black male tennis player whose failure has been negated from history, the work points to exceptionalism, questioning the extent to which pioneering figures are truly able to break down the barriers of long-standing systemic inequality. Like all of Fordjour’s work, the painting is situated at the intersection of achievement and injustice, grief and triumph.

Derek Fordjour (b. 1974, Memphis, TN) is a graduate of Morehouse College in Atlanta, Georgia, earned a Master’s Degree in Art Education from Harvard University, and holds an MFA in painting at Hunter College. His work has been exhibited in numerous venues including The Whitney Museum, Sugarhill Museum, Harlem and BAM in Brooklyn. In September 2018, the Whitney Museum in partnership with TF Cornerstone and The High Line debuted a public billboard installation by the artist as part of its Whitney Billboard Project. Also in 2018, Fordjour was commissioned by the New York City MTA to create a series of permanent mosaic installations, which were installed at 145th Street Station on the Lenox Avenue line. Fordjour’s other awards include the 2018 Deustche Bank NYFA Fellow Award, the 2017 Sharpe-Walentas Studio Program in New York City and the 2016 Sugarhill Museum Artist-in-Residence. His work has been reviewed in The New York Times, The Los Angeles Times, Hyperallergic and ARTnews. He was appointed Critic at Yale University University School of Art in 2018. His work also appears in several collections throughout the US and Europe including The Whitney Museum, the Studio Museum, and the Dallas Museum of Art. He lives and works in New York.