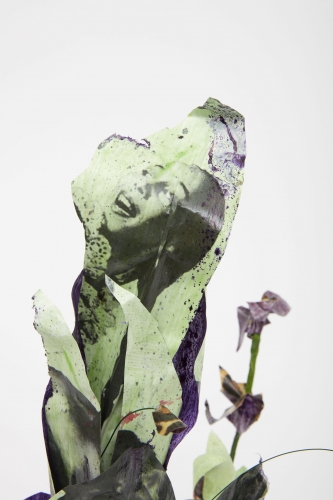 Night Gallery is pleased to announce the opening of A Field, an exhibition of new work by Kandis Williams at the Institute for Contemporary Art at Virginia Commonwealth University. The exhibition is curated by ICA Associate Curator Amber Esseiva and is the third iteration of the Institute's annual Provocations series.

As the museum writes,

A Field is a new, site-responsive commission by Kandis Williams (b. 1985, Baltimore, MD). Williams addresses the regimes of control associated with labor, including at prison farms in Virginia. A Field takes place within a greenhouse, surrounding the viewer with plant sculptures. These works feature photographic collages affixed to the wire forms of monsteras, palms, banana trees, and vines, appearing variously in pots on the floor or on greenhouse benches, as well as along the gallery walls. For Williams, collage is able to choreograph and index both thought and movement. The medium allows Williams to merge contemporary and historical referents, exposing the entangled relationships between humans and non-humans subjected to destructive world-building.

These collages, which appear on the plant leaves and as backdrops throughout the gallery, depict laboring bodies in action. They include archival photographs of chain gangs on Mississippi farms, many taken from the estate of Alan Lomax and the Library of Congress; images from vintage pornographic magazines—Jet, Players, Sepia, Mr. Long, and Black Legs; and depictions of dancers performing the Uruguayan tango, a choreography conscripted from workers’ traditions. In these overlapping images, sometimes assembled in figurative constructions, a schema is revealed in the relations between labor and performance, performance and sexualization, sexualization and labor.

Plants constitute a life-force subjected to classification and forced migration, remarkable for their persistence and adaptability. The plant is sentient yet silent, subjected to changing environmental demands as it is displaced and commodified. Plants suggest both the ravages of colonialism and a future for life beyond humanity.

Among Williams’s plants is the artist’s new video, Annexation Tango (2020), produced in Virginia and Los Angeles by means of on-site and green-screen photography, as well as found footage. The fields that appear as backgrounds were formerly those of the Lorton Reformatory and the Virginia State Prison Farm, two facilities where incarcerated people were made to work as a condition of their sentences. Superimposed onto this landscape is dancer Roderick George, performing a tango for one.

Utilizing video, sculpture, and installation, A Field considers horticultural environments to explore the ways in which people, much like the crops they cultivate, can be subject to exploitation and control. By examining systems that seek to classify and manage, Williams reminds us of the potential in evasion; that there is power in remaining wild. To evade cultivation is to commit to growth on our own terms; to nurture and be rooted in our desire for change and adaptation.

Kandis Williams (b. 1985, Baltimore, Maryland) is featured in the 2020 edition of the Made in L.A. Biennial at the Hammer Museum and Huntington Libraries. She has had recent solo exhibitions at Night Gallery, Los Angeles; KW Institute for Contemporary Art, Berlin; and Ficken 3000. Williams has an active curatorial and pedagogical practice, and runs Cassandra Press. Her performances have been mounted in clubs and institutions across the world. She is currently a visiting faculty member at the California Institute of the Arts. Williams lives and works in Los Angeles.