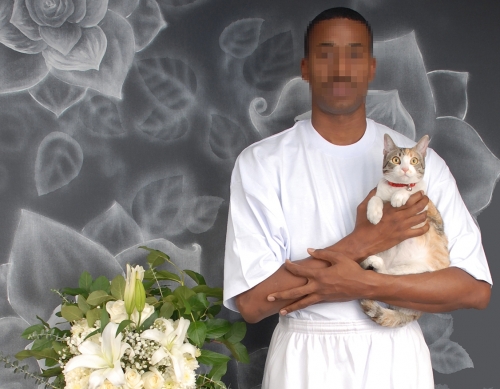 “A named meaning is a dead meaning.''  -Roland Barthes, S/Z

“A leftover of the activity of the scopic drive in the Real, the object a is cleft from the subject as well as from the Other, and it has no direct representation by image. In the field of vision, such a split object a is the gaze. It is a remnant of the scopic drive’s trajectory of reaching for objects. It is a leftover of inaccessible “bodily samplings” of my corpo-reality and of the Other. Split from the subject and split from the Other, such a gaze is for Lacan an absence, a libidinal loss.” -Bracha Ettinger

"Language has always been the perfect instrument of empire."

Night Gallery is excited to produce a solo exhibition by Kandis Williams at 219 Madison St. Williams, who is based in Los Angeles and Berlin, is known in equal parts for her work in collage and  performance. Her new exhibition, Eurydice, features a salon-style display of collages, sculptures, videos, and floral arrangements that, taken as a whole, confront the crisis of aesthetic and political entanglement surrounding so-called “black identity” in relation to mainstream American culture. Taking the myth of Eurydice (in which the woman-turned-love-object is denied rescue from Hades when her lover turns to look at her) as her starting point, Williams embarks on a personal investigation into the history and psychology of the Western visual imagination.

Williams’ work here draws from Hortense Spillers’ analysis of Black Culture as a “curricular object,” studied so intensely and fetishistically within artistic and academic institutions that it becomes “produced away from social movements” – that is, politicized via affects of access: criminality, entertainment, athleticism, hypersexuality and biraciality. These fields construct the Black Subject as the ground of all progressive politics, while denying the consciousness of black bodies in systems of incarceration, forced labor, rape, and in poverty. As Janaya Khan writes on the Parkland shootings, “To be black in this world is to know that what is acceptable in the actions of other people is unacceptable in you... tactics informed by black resistance, like disruption, are celebrated unless black people are the ones doing the disrupting.”

Collaging onto mirrored surfaces, Williams uses appropriated photographs that embody artist-philosopher Bracha Ettinger’s notion of the “estrangement and absorption” produced by American culture. These images become a kind of contemporary Hades in which the Shades are aestheticized raced bodies, trapped in a feedback loop of fetishization and erasure. One recalls Barthes’ likening of a photographic subject to a butterfly that has been anesthetized and pinned up inside a box, unable to “emerge” from the still image. The plants that adorn the walls alongside these works highlight the imposition of a moral imperative upon human bodies that is not applied to flora. Seen in this way, the objectivity afforded to our perceptions of plants becomes a gesture connoting autonomy. The body and its translation into pop imagery are separated here, as Eurydice and Orpheus and must follow their Real dimensions into the abstractions of signage.

In her videos, shot by Brian Echon and Steele, Williams applies this concept of fastening to the myth of Eurydice. The unseen face of performers Josh Johnson and Cassandra Momah contrast the determined and nonnegotiable movements of counter-performers Josh Miller and Hardcore Tina. Cellist Patrick Belaga and musician Alex Zhang Hungtai lend scores of “severance” to the choreographies wherein Eurydice is consigned permanently to the realm of the immaterial because Orpheus, the archetypal artist, cannot turn away from her. Both musical pieces – Zhang’s “Divine Weight” and Belaga’s “Dendritic Mass” – create immediate euphoric experiences of dissociation while also conjuring the ceremoniousness that befits the ancient myth.