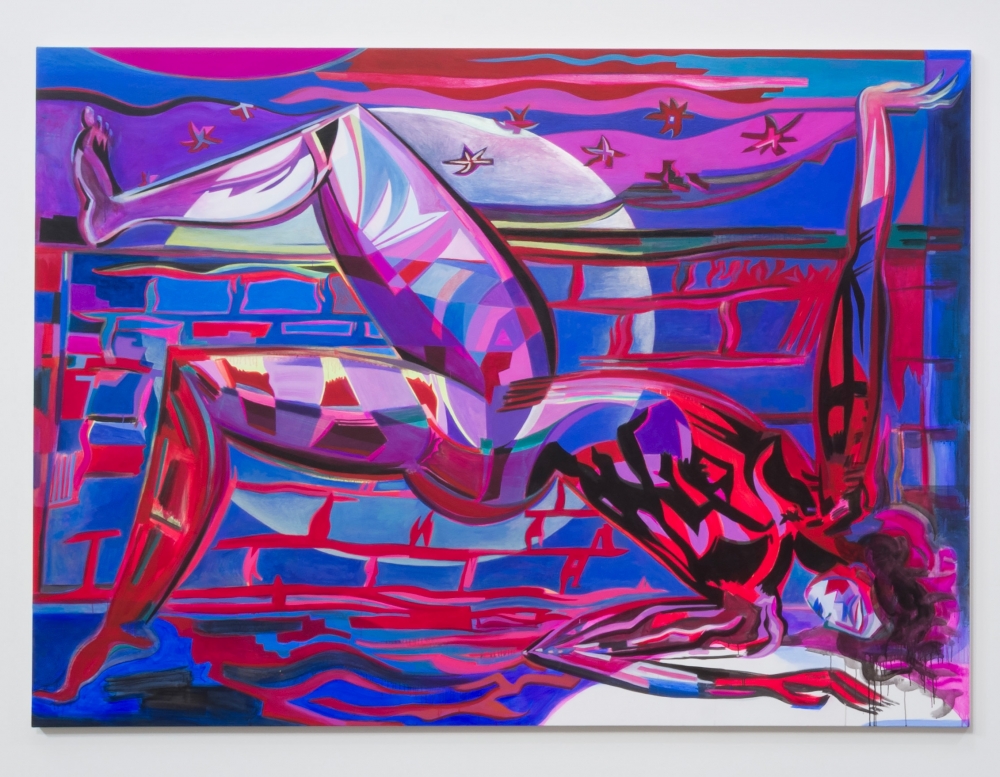 Night Gallery is honored to announce the Whitney Museum of American Art’s acquisition of Mira Dancy’s painting “Sinking Sky,” 2017, for their permanent collection, with funds from the Painting and Sculpture committee. “Sinking Sky” first appeared in January 2018 at Night Gallery as part of Dancy’s solo exhibition High Hell, a series of works depicting warlike figures posed against a backdrop of chaos and destruction. “Sinking Sky” was a central work in the presentation, additionally appearing as the basis for an ink mural that installed at the exhibition’s entrance and manifesting the series’ central themes of isolation, defiance, and renewal in the face of catastrophe.

“Sinking Sky” features Dancy's sweeping lines and signature purples, reds, and pinks, creating an atmosphere of turbulence, destruction, and beauty. The painting’s subject crosses the entire canvas, fallen in an operatic swoon, and her expression is one of transcendental repose. At the same time that the figure stands out from her environment, she also dissolves its jagged patterns into her own form, embodying her profound dislocation: the world seeping into the subject at the expense of herself. The figure is especially translucent under a bright circle of moonlight that shines on her lower body, illuminating her womb and parted legs. Her outstretched hand, frozen in a “stop” motion pointed toward the night sky, demands her solitude and insists upon her autonomy. Dancy’s impassioned, masterful painting demonstrates an artist at the height of her abilities, capturing a moment of anguish while proclaiming the enduring possibility of ourselves as the soldiers for our own salvation.


Mira Dancy (b. 1979) received her M.F.A. from Columbia University in 2009, and her B.A. from Bard College in 2001. She has had recent solo exhibitions at Night Gallery, Los Angeles; Chapter NY, New York; Galerie Hussenot, Paris; Lumber Room, Portland, OR; and the Yuz Museum, Shanghai. In 2015 she was included in Greater New York at MoMA PS1. Dancy's work has been covered in The New York Times, Art in America, Artforum, Vogue,Modern Painters, Kaleidoscope, and ArtNews, among other publications. She is based in New York.