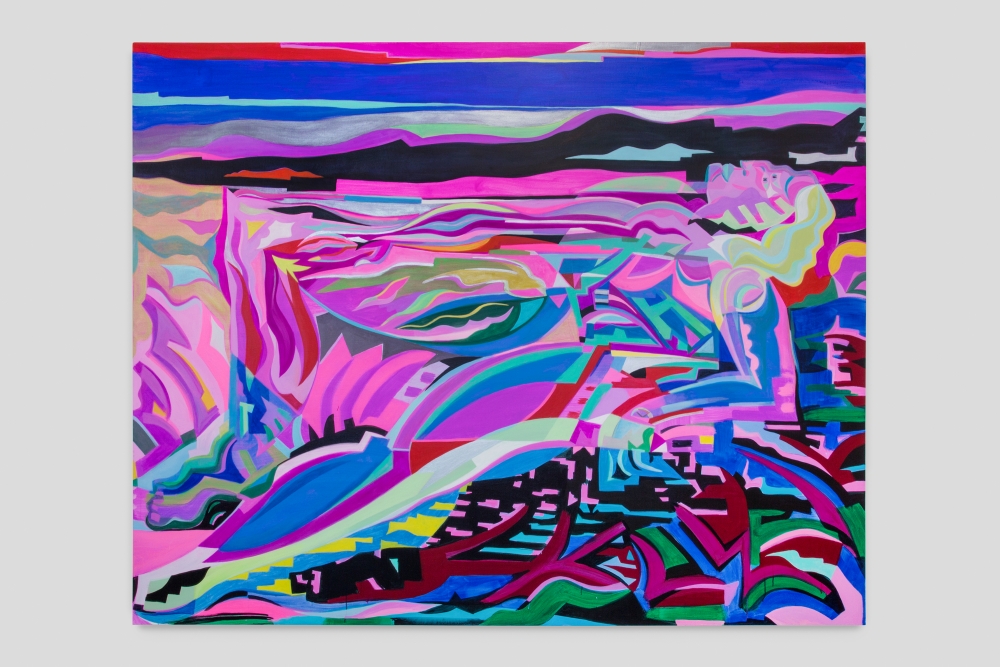 The Columbus Museum of Art has acquired Mira Dancy’s “Stacked Skies,” 2020. Dancy is a Los Angeles-based painter who has presented numerous exhibitions at Night Gallery, the most recent of which, High Hell, opened in January 2018. Dancy is known for vividly chromatic acrylic paintings which map an ongoing exploration of the body in relation to geometric structures. Her compositions are characterized by bold, solid forms that play off of the flatness of the picture plane. “Stacked Skies” comes from a body of work that contemplates the body clock – the human physique as a measure of the force of time. The painting contains buried treasure for the viewer: the figure’s hands are positioned in relation to the hands of a clock, telling the time of the tableau in which we find her. Dancy’s work is also included in the collections of the Los Angeles County Museum of Art; the Whitney Museum of Art, New York; and the YUZ Museum, Shanghai.

Mira Dancy (b. 1979) has had solo exhibitions at Night Gallery, Los Angeles; the Yuz Museum, Shanghai; Chapter NY, New York; Galería Agustina Ferreyra, Mexico City, Mexico; Galerie Hussenot, Paris, France; Lumber Room, Portland, OR; and JOAN Los Angeles. Her work is included in the collections of LACMA, Los Angeles; The Whitney Museum, New York; and the YUZ Foundation, Shanghai. In 2015 she was included in Greater New York at MoMA PS1. She has been covered in The New York Times, Art in America, Artforum, Vogue, Kaleidoscope, and ArtNews, among other publications. She lives and works in Los Angeles.