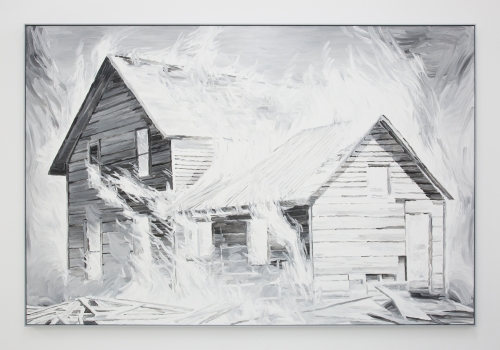 Night Gallery is proud to announce the addition of Cynthia Daignault to our gallery roster. Daignault’s solo exhibition Elegy opened at Night Gallery in September 2019, following her inclusion in two prior group exhibitions, True Lies and Blue State. She will present new work in Night Gallery's two-person presentation at the Armory Show in March 2020.

Daignault is known for an ambitious and wide-ranging painting practice, exploring the contemporary American experience through a diversity of subjects. The breadth of her imagery ranges from observational landscapes to everyday objects to media imagery. Her works are often serial, side-by-side or in grids, but always rendered in an evocative, gestural style. Her continued emphasis on the artist’s hand speaks soulfully to the position of the individual facing the wide expanse of history—in turns levelheaded, amused, outraged, or mournful. Other series of more abstract and text-based works pare down portrayal to a single word against a background color, rooted in language, poetry and her practice as a writer. Daignault casts widely to select her source material, using associations and wordplay to suggest many shades of experience at once. Taken as a whole, Daignault’s work asserts painting’s continued ability to portray consciousness and memorialize history, uniting divergent subjects to depict and commemorate this fleeting moment in time.