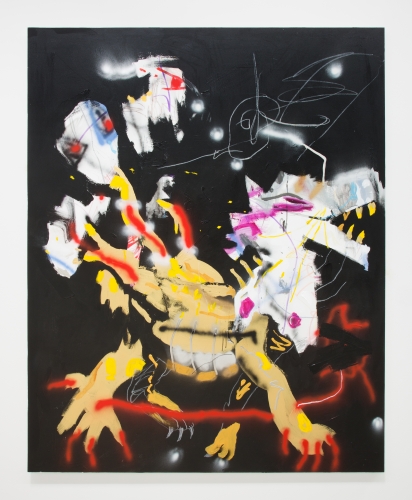 Robert Nava’s painting “Untitled,” 2020, has been acquired by the Institute of Contemporary Art, Miami. The work was presented in Night Gallery’s ten-year anniversary exhibition MAJEURE FORCE Part One, which opened in June 2020. Nava is known for paintings of fantastical creatures which arrive at the intersection of surrealism and expressionism, building hybrid beings out of fervid, fast-paced gestures in acrylic, grease pencil, and pencil. Nava’s beastly figures combine and reinvent creatures out of mythology, science fiction, and the animal kingdom, puzzling together timeless archetypes in the improvisational manner of the unconscious. His loose, emphatic painting style similarly engages the personal dimension of the work, conjuring a raw sense of emotion and physicality. This marks Nava’s second major museum acquisition, following the addition of four works on paper to the Art Institute of Chicago earlier this year.

Robert Nava (b. 1985, East Chicago, IN) has had solo exhibitions at Sorry We’re Closed Gallery, Brussels, Belgium; and Night Gallery, Los Angeles, CA. His work has been included in group exhibitions at V1 Gallery, Copenhagen, Denmark; Wayne State University, Detroit, MI; and Safe Gallery, Brooklyn, NY. His work is included in the permanent collection of the Art Institute of Chicago. Nava has been the subject of profiles in LA Weekly and GQ, among others. He lives and works in Brooklyn, NY.